Hours: Tuesday to Saturday, except holidays, from 9 am to 2 pm.

The Alhambra Museum occupies the south wing of the Palace's ground floor. It is distributed in seven rooms arranged chronologically, dedicated to Spanish-speaking culture and art.

It was created in 1870 to guard the numerous archaeological testimonies collected by the Provincial Commission of Monuments. In 1994 he was assigned to the Board of the Alhambra and Generalife. 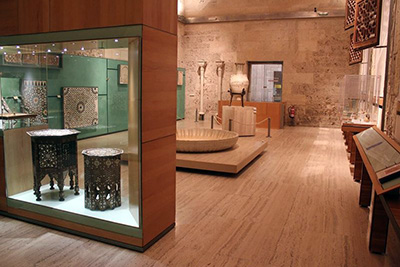 Located on the north facade of the Palace of Carlos V, panels, materials, models and an audiovisual are shown that contribute to understanding and seeing the Alhambra.

The Museum of Fine Arts occupies the top floor of the Palace. Among its backgrounds are sculptural and pictorial works from Granada from the 15th to the 20th century. Among the most significant pieces, the Limoges enamel, the Burial of Christ, the work of Jacobo Florentino, the still life of the thistle by Fray Juan Sánchez Cotán, as well as masterpieces of Baroque, Neoclassicism, Romanticism and Granada's painting of the nineteenth and twentieth centuries, among which Manuel Angeles Ortíz stands out, from whom the museum retains an important collection of works from its series of "Albyzín" and "Paseo de los cipreses".

Ángel Barrios Museum (Calle Real, next to the Mezquita Bath)

The exhibition shows personal memories, furniture and paintings of the musician's private collection.