Brief description of the monument

This tower, which was already called that way by the Arabs, is situated on the north wall, forming an angle with the lower wall of the Alcazaba, and through it the Alhambra communicated with the city through the Almanzora neighborhood.

The entrance to the tower, older than the Tower of Justice according to its characteristics, features a pointed horseshoe arch of brick and stone imposts, trimmed with a festoon with black and green white glazed pieces. There are two more arches of the same type, the last of which communicates with a nave divided by arches whose walls have new arches that house seats for the guard. Two other arches communicate with the lower adarve of the Alcazaba and with the exit of the tower, which presents two new brick-pointed horseshoe arches. 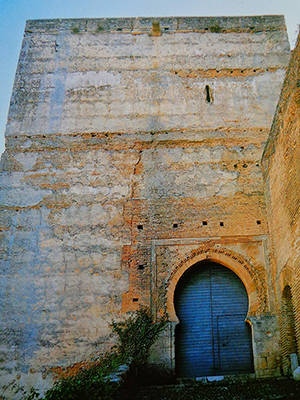